Being A Strong Father In A Culture Of Weak Men

Boys should be able to describe what a godly man looks like, having watched one from the time they were a little boy.  Unfortunately, this isn’t the case for most.  For many boys, a godly man is something like Superman or Big Foot.  It is not something that can be grasped.

A couple of weeks ago I brought my two boys with me to a home and garden center.  As I was checking out, the old man behind the counter stopped me in my tracks with what he said.  My boys were off to the side, gently playing with the wind chimes.  They, too, didn’t know how to respond to the old man’s comment.

“What are you two girls up to today?”

I don’t think he meant anything bad by it.  It’s not like they were in trouble or something.  Rather, he was probably just a good-ole country boy looking to ruffle some feathers in my sons.  My boys sheepish smiled, and even softly replied, “We’re not girls.”  Unfortunately, my reply was equally as soft.  “Oh, boys, he’s just being crazy saying you are girls.”

It wasn’t until I was driving away did I begin kicking myself.  I realized I missed an opportunity to speak into my sons.  They needed me to.  They were watching how I would handle that situation.  That day my boys needed a strong father. 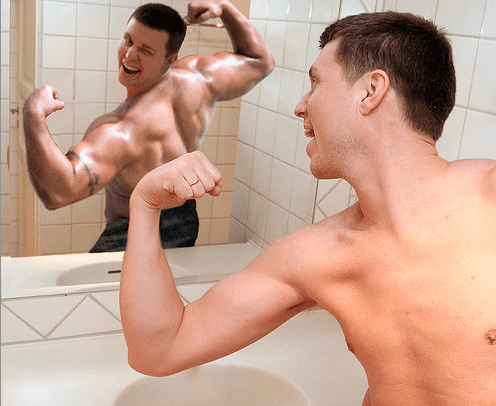 I have seen so many weak boys get married, begin working, and even start reproducing with their new brides.  They wouldn’t tell you they are weak – probably because they don’t know they are.

For years I have quoted a verse that jumped out at me the first time I read it:

Praise the Lord! Blessed is the man who fears the LORD, who greatly delights in his commandments! His offspring will be mighty in the land;” Psalms 112:1,2a

As a father, I pray that my boys will grow up to be strong, godly men.  In the meantime, there are certain things I hold to in an effort to help lead them that way.

1. Show them the power in weakness.  We’ve been led to think that broken, emotional, and dependent men are all signs of a lesser male.  This is a lie.  I want all my kids to hear from me about my imperfection.  I want them to hear how grateful I am for the grace of God.  That grace will bring me to tears at times.  It does because it is overwhelming.  It is freeing.  As opposed to teaching them to pull themselves up by their bootstraps, I want them to learn what it’s like to approach a powerful, mighty, gracious God who welcomes dependent, broken, faith-filled people.

2. Help them realize their strength.  I consider it “papa bear” time.  I’ve been wrestling with my kids since they were babies.  They’re getting to that age where their punches actually hurt.  With each of their best wrestling moves or carefully placed punches, I let them know I see an improvement in their strength.  This is something I never want them to question.  They have what it takes.

3. Model for them how to love and honor their wife.  When my kids were little, they would cry if we told them we were going on a date.  Now it is such a regular event that they barely notice.  We’ve explained many times that mommy and daddy love each other, so we want to go spend time together – just the two of us.  They see me get excited about a gift idea, and they help me surprise my wife in unexpected ways.  I hope that someday I will be able to help them surprise their wives as well.

4. Teach them to fight fairly.  My wife and I get under each other’s skin at times.  We conflict.  We bicker.  We snip at each other.  I can be grumpy, or too curt.  My kids get front row seats to all this.  I don’t want them to wonder if they have a bad marriage someday because they are arguing with their spouse.  I want them to see that conflict is a good thing.  It brings growth, freedom and friendship if done well.

5. Provide an apprenticeship.  I love it when my boys work around the house with me.  So many teachable moments open up as we are building a bike rack (like last weekend) or splitting firewood in the backyard.  I want my boys to understand the power of power tools, as well as the intricacies of doing electrical work.  Each time I work, I invite them in.  Sure I could get it done faster without them, but there is something about slowing down and accepting their help that is satsfying.

6. Teach them the Story.  As they grow up, I want to continue to unfold the story of God to them.  It’s not just about memorizing Scripture.  It is about them coming to understand God as Father.  They need someone who can hear their tough questions about God, and dig through the Scriptures to help uncover the answer.  And when those times come when we don’t fully understand the answer, I want to explain to them exactly what faith is, and how it is something to not be afraid of.

By the way, after a few weeks of stewing on how I handled that old guy at the home and garden center, I brought my boys back.  I brought them in to dare him to say something like he did before.  I felt like John Wayne, calling out a man to a duel.

Sure enough, he was there, right behind the same counter he was before.  I walked straight up to him and looked him square in the eyes.  Unfortunately, he didn’t go running his mouth that day.  BUT, if he had, I was prepared to tell him this:

“Oh, these aren’t girls.  They are future men.  And each day it is my responsibility to teach them how to get there.”

What are some other ways men can be strong fathers in the lives of their kids?